Soldiers Here and Over There Saying “Enough” 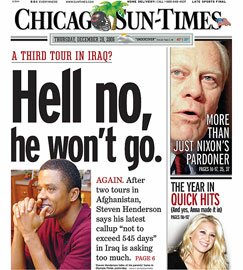 Today’s Chicago Sun-Times cover featured the story of 34 year old Steven Henderson, a former Army sergeant who spent two tours in Afghanistan and received an honorable discharge from four years of commendable service. Then, George asked him to do it all again:

A letter he received two weeks before Christmas orders him to report to Fort Benning, Ga., by Jan. 14. Under the order, he is required to fight in Iraq for a period “not to exceed 545 days.”

But this time, Henderson says he will not serve his country.

“It would take a miracle for me to put on a uniform again and to carry a weapon in Iraq,” he said. “I have no intentions of going to Iraq.”

“Not to exceed 545 days.”? 545 days is 18 months, but the latter sounds a lot longer. A year and a half dodging bullets seems even less appealling.

That’s why it’s going to be very difficult for George to raise an army to fight his ill-conceived, ill-advised, unethical, immoral, and illegal war on the people of Iraq.

What’s Georgie going to do when intelligent young men like Henderson tell Georgie what he can do with his stinking war? Send the twins? Go himself? Not going to happen.

And about that “surge” George was floating . . .

The Associated Press is talking to a lot of soldiers in Iraq and, despite Robert Gates’ Iraq propaganda tour, a lot of boots on the ground don’t see a reason to send more nor want more American soldiers over there.

“Nothing’s going to help. It’s a religious war, and we’re caught in the middle of it,” said Sgt. Josh Keim, a native of Canton, Ohio, who is on his second tour in Iraq. “It’s hard to be somewhere where there’s no mission and we just drive around.”

“No mission and we just drive around”? That sounds a lot like Bush’s entire term in office.

All jokes aside, every day that Bush plays “switch finger” over his Iraq occupation, is another day he’s condemning our soldiers to an early death.

It’s time to bring them back.

This entry was posted by Staff on Thursday, December 28th, 2006 at 1:35 pm and is filed under Comment. You can follow any responses to this entry through the RSS 2.0 feed. You can leave a response, or trackback from your own site.

One Response to “Soldiers Here and Over There Saying “Enough””